I am finding that Kenyan companies are really working hard to ensure that they get and retain customers especially in areas where there is huge competition. I once worked in tourism and I remember one of my bosses used to really insist that our company should have an edge over the competition.

I believe that companies increase their value proposition with these loyalty programs which gives them an edge over the competition. Here are five companies that I believe, must be doing something right.

With all the fuss that the high fuel prices are generating, this program seems to be gaining momentum. It has all the makings of being a win-win but I believe that the odds are greatly in favour of the company. The fuel prices are being regulated so there are no major price differences except across different regions. I am going to fuel anyway, so I might as well fuel where I will at least get something back. So if you go through the process of acquiring a K-card, which basically will only entail an initial prepayment of Kshs. 3,000 which you can use immediately to fuel your car, this card enables you to get 2/- off per litre of fuel every day. The deal is made sweeter on Tuesdays and Friday where you get an additional 2/- off and the sweetest is Sundays where you get 3/- more off per litre. I say this is in favour of the company since one, you are essentially prepaying for fuel meaning the company has your money before you use it and two, the discounts are credited to your card so you can only use them for fuel at the company’s outlets. The credits are also sent to your card on a monthly basis so again even that credit you only get after one month of loyalty.

I have seen several downsides to this thing. This translates to customer dissatisfaction and there are times I have just decided to do without those points.

Of course Kenyans being ‘peculiar’, there are usually massive jams at some Kenol/Kobil outlets especially on Sundays. Many have gotten the habit of fuelling mainly on Sundays when you get the maximum 5/- per litre discount. The process of topping up your card is also quite lengthy and in itself this further aggravates the problem. I also do not like to top up my card and just carry it around with credit, I like to top it up and use the exact amount I have topped up as soon as I do. The company has provided some PDQ like machines that are used both to top up your card as well as to carry out the transaction. Some of these additional processes (eg. after a while the guy gives you the machine to enter your pin) cause such delays that you can even see it in the faces of the already overwhelmed pump attendants.

Some stations refuse to top up your card at certain times, especially at night claiming that the “Boss” has gone away with the dealer card required for topping up. Other stations completely refuse to allow you to top up your k-card with a Visa Debit/Credit card and insist you must deal in cash. I was shocked one Sunday when I was served by a proprietor of one station who told me that she had woken up so early that morning to go to church “to pray that Kenol/Kobil would scrap this system as it is causing unnecessary traffic in my station”.

This is another excellent idea. After registering, a completely painless process, all you need to do is to use your phone as usual. You then proceed to get I think one Bonga point for every 10/- you spend. You can regularly check using a free text message to see how many Bonga points you are accumulating. Again one figures, I am going to use my phone anyway so I might as well use it and get something back. After accumulating points, you can later use them to obtain airtime and to purchase different phones and gadgets like modems and laptops from Safaricom shops. I have enjoyed getting phones and stuff using Bonga points as I think psychologically you feel you are getting “something for nothing”.

But this system also has some downsides I have seen. Safaricom solely decides how many Bonga points you will need to “buy” the gadgets they have on offer and they can change this at any time and there is nothing you can do about it. I once “saved” some Bonga points to acquire a certain Blackberry model which was on offer for 20000 Bonga points. The day before I reached the 20000 points, I found that the “price” had gone up to 40000 Bonga points. What could I do? Nothing. Another thing is that since the calling rates have reduced, these Bonga points, which were set when calling rates were more than 10/- per minute, you will still need to spend 10/- to get one Bonga point. So a Bonga point is “more expensive”. I have also tried to get some phone using Bonga points only to be told that the shop has stock of that model only if you pay cash. This is annoying to the customer but i suppose it works for the company since “where else are you going to spend you points anyway?”. But Safaricom are innovative. The other day, the made it possible to actually transfer Bonga points to another subscriber. Imagine that? Transferring loyalty! Hmmm… one day, who knows? You may be able to convert your Bonga points to M-Pesa… Who knows?

Using a smart card, you get a smart point for every one hundred shillings spent. Then once in a while, you can convert the points into discounts and other great stuff like school fees. This is really cool. Sometimes you may find that the person in front of you has just bought a fridge or some really huge item and does not have a smart card and so they ask you if they can use your saying, “someone may as well benefit…”. There was a time at Nakumatt Mega when they used to sell cars downstairs. Now imagine a guy letting you use your smart card as they buy the car. Hmmmm… I was pleasantly surprised to find I could use the smart card in Nakumatt Kampala. Now that was really cool.

The downside, well. Their customer care sucks. There was a time our card was damaged and it took more that three months to get it replaced and not the two weeks they had promised. I also wish there was a way you could give the number of your card in case you forgot to carry it. My wallet is now full of cards! Again, it is Nakumatt who decides what to give you for your points and what values to attach to them. But generally this is a good product.

I am not sure which came first but this feels a bit like a “me too” product but I also like it. I also think Uchumi points are easier/cheaper but I am not sure. But it has some nice things that I think the Nakumatt Card does not. For instance, you can just give the teller (or whatever they call those folks at the till) your card number and it will still be credited. The cards also seem to have a bar-code system so they are not like the Nakumatt ones that you have to physically insert into the keyboard of the till machine before you begin the transaction. Tusky’s also have one but I am also not so familiar with their conditions. Oh well, I see now why they call them loyalty programs! 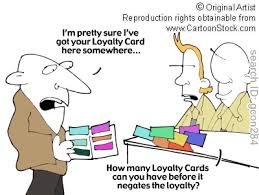 This is still at conceptual level, maybe you read one post you get one free. I don’t know. This is tricky to implement since the one you read is free anyway. I am working on it. But hey, if you have read so far then you are already a valued partner of this blog. The other day I found a real live fan. I could not believe it. “Heeeee, I love love love your blog. I look forward to it so much every Monday and Friday” I was like OMG! I believe there are quite a number of you who read, enjoy, nod and smile but don’t comment. Well, wherever you are, whoever you are, you are valued.

Error: Twitter did not respond. Please wait a few minutes and refresh this page.