This last week was the busiest I have had in a long time as far as travel is concerned. I drove long distances to far places and had a lot of fun and interesting experiences. It was all mostly local and had me thinking, is this how the rest of Kenya is? Then it takes a long time to develop a country. It can not be done easily as there are so many variables to deal with. Spending so much of one’s life in Nairobi, Facebook and/or Twitter sometimes blinds one to the surrounding world and can make one begin to think that the rest of Kenya is like that or that the rest of Kenyans think like them. It can also make one have a messed up view of how the problems of this country and indeed the region can or should be addressed.

It has been a long time since I last went to Arusha. I had no idea what to expect. I was afraid I would find the place has changed so much that I would struggle to get around. I was aware that the Nairobi-Namanga road was now near perfect, having gone there with an amazing bunch of bikers last year. However, the last time I went to Arusha, the road on the TZ portion from Namanga to Arusha was terrible. Potholes like you wouldn’t believe, diversions with lots of dust. So I was not in a hurry to begin this portion. The border procedures were very fast and simple. Easier even than crossing to Uganda at Busia. It was also interesting to note that TZ and UG immigration authorities have embraced technology more than their Kenyan counterparts. As I left Kenya all they did was to make me fill a line on the records for my car and stamp my passport. At the TZ counter I had to step back in front of a webcam, put my fingers systematically through a finger print reader. As I passed through the border I was also surprised that I was not harassed as I had feared about the requirements that every car in TZ must have the ‘LifeSaver’ triangle and a fire extinguisher. After leaving Namanga for Arusha I was pleasantly surprised to find that the road was so smooth and even better in some parts than the Kenya portion. It is just not marked. So you have no idea where the sharp turns are, what towns you are passing through or the speed limits at all.

I also love the view of what our family calls the “Teletubbies” Hills just outside Arusha, with their golf course-like, almost velvet green covering. This time though, it is so dry and brown, still velvet but brown. One thing I did not like that is different with Arusha this time, a common phenomenon in all major towns in the region, the worst being Kampala and possibly Kisii, is the proliferation of boda boda motorcycle taxis. Any drivers nightmare. They are like flies I tell you, just more annoying. By the way Arusha is not far. It is actually like going to Voi in terms of distance. I think it is a mind thing that makes you think you’ve gone far. I was actually back home by the end of the day having left at 10am.

In my last post, I talked about the Narok road. It is so good. This is a wonderful, stress-free drive. It was fascinating to see an often missed landmark, I have no idea what this place is called. But spending a few minutes there in solitude was divine. It is a river just before Keroka. 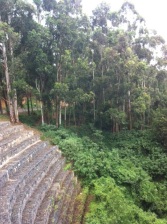 One fascinating experience in Gucha was when I asked a guy about a place to sleep. He directed me to some establishment in town. When I asked him how the rooms were he was very surprised. “Oh you mean you also want to sleep there, I thought you only wanted a place for your car to sleep! Then you need a hotel!” The highlight of my evening in a budget (read cheap) hotel room where everyone was overly concerned with Todo Sobre Uhuru/ICC, was a call I got from my little sister, Mueni saying she would email me a draft of her upcoming book which I read with joy. Great book. My sis is going places with this book. That is all I will say about her book. I asked her to ensure that she mentions this in the “Acknowledgements” section but I am putting it here just in case she forgets.

I don’t think I have spent enough time in Awendo to give it a proper review. This time I was there for about 2 hours. I was actually upset when I got there as there was no power. I was afraid that my trip would have been in vain. We IT guys tend to feel unemployed where there is no power. I even started contemplating going back there in about a week. But miraculously, power came back just long enough for me to do what I had gone to do and then it disappeared again. I left Awendo for Nairobi at around 6pm

I had thought I would make it to Nairobi in good time but it was raining heavily and I was so tired. I decided to spend the night at Narok. I checked in to what was a nice place and after being shown a nice parking spot behind the hotel, unpacking and preparing to shower, I decided to plug in my phone to charge while I was in the shower. To my shock (not electric!) the socket was dead. I walked down to the reception to “cause”. The manager apologised. I thought he was just going to assign me a different room but alas! He pointed out that they all had problems with the socket. Deal-breaker right there. I checked out and he had to refund me my entire 850/- (USD 10 until recently) that I had paid. I found another place with a working socket. By this time I was so tired, it was past midnight and I had a long trip in the morning.

In the morning I made it to Nairobi around 7:30 and then my wife and I had to go to Kagumo for the funeral of the dad of a friend of ours. The trip was uneventful (the way I like them) and the maps app on the iphone was a great time-saver. “So how was the funeral?” Why do people ask that? What answer can one give? One of the interesting bits was when during the sermon, the speaker talked of how people get religious when a member of their family dies. They even insist on taking the body to church, of someone who had no time for church in his lifetime. What would happen if the guy was to suddenly wake up and find himself in a church? What would you do?

We spent the night at a town called Kenol. I did not ask but I suspect it is named after the petrol station there. What would they call it if Total or Oilibya bought that station? Just a thought.

When we got back to Nairobi I saw the new Honda Accord. It is fascinating that Jesus and all his disciples could fit in such a car. And, following Jesus’ lead, the Apostles car pooled in a Honda… “The Apostles were in one Accord”.

Interesting week of travel. How was your week?

4 responses to “Travelling all over the place?”