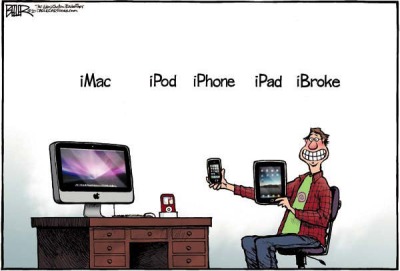 This is the latest addition to my gadget collection. I do not intend this to be a technical review as such, it is more of a personal observation based only on the meandering experience I have had with it over the last six weeks or so. How I ended up even owning this is a miracle in itself. I remember the prayer I said to God on my way home the night it became clear I had one (sometimes I walk by sight). It was a prayer of thanksgiving but in a sense out of realisation that God knew all along I would have one long before I got it. He knew I would though I never saw myself having one.

Anyway, I did end up with one. He truly is a faithful God.

Since the iPad came out (not in a gay sense of course, aiii, what’s happening to me?) I, like most iPhone users, assumed it was just a big iPhone and therefore unnecessary. Boy, were we wrong? (this also sounds gay but isn’t). When iPad apps started appearing (hey look, I didn’t say ‘came out’) they opened up a whole new world that had the rest of the IT hardware world start with their own ‘me too’ versions of the iPad. I think Steve Jobs, typical of him, took a big gamble, and hit big.

After the first two days with the iPad, it became clear that my trusty Blackberry 8800 had to go. It simply became unnecessary. The two main uses I had for it, mail, browsing and chatting (ok, so I can’t count) were quickly and aptly taken over by the iPad. The iPad now contains everything I have in the iPhone and much much more. The browsing experience is amazing not just due to the additional screen real-estate but a lot more. iBooks, the new book reading app enables one to carry a huge book collection and it is a great PDF reader too. Native iPhone apps can also run in the iPad but the resolution worsens when you expand them to fit into the wide screen. If you don’t own an iPad, trust me, after browsing on a borrowed one, you will hate browsing and reading on your iPhone.

Are these even necessary anymore? At this point in the tech-world, I’d hate to be a laptop. After decades of gloating over the desktop PC about it’s portability, ease of use and other fancy additions that gave them a ‘whatever you can do, I can do better’ attitude towards the desktop PC, laptops are now facing a similar onslaught from smartphones and tablets and ‘the cloud’. I never thought that I would one day consider my HP Pavilion dv5 bulky and end up treating it much the same way like the desktop it replaced. With all the above gadgets, there are mornings when I decide I will not need to carry it. Apart from my software development which I do for the windows environment using windows tools, the HP is almost completely dispensable. In terms of my life, this gadget is hanging by a thread. Poor thing, I think it is even jealous that this post, and last week’s, I have done entirely on the iPad. This morning it told me it dreamt I renamed it my lapbottom.

This is the odd one out. To put a wallet in a list of personal technology would be a stretch, but I insist. It is technology, mainly analogue but technology nonetheless. Together with the iPhone, this is another item I would turn back if I realised I had left home without. I don’t carry too much cash in it but a number of ATM cards, a k-card (which I highly recommend for those who value great fuel discounts), my original ID which I use to frustrate bank tellers, M-Pesa agents and overenthusiastic ‘denial-of-entry’ watchmen in some buildings when they think they have found a way of denying me services/entry when they assume I don’t have it.

I also carry in my wallet, photos of my wife and two boys. Fine they are so old (the photos, not my wife and kids). In fact almost every week I vow to find more recent ones. These photos, interestingly enough, sometimes wake me up and help me avoid impulsive spending habits when I am not with my family. It may be silly but a lot of the things we spend money on, we would not if we took a moment’s pause and consider the implications of the purchase on the family.

Again I ask, what are your five, must-carry, items?

4 responses to “Personal technology: 5 items I’d hate to leave home without and why – Part 2”

Error: Twitter did not respond. Please wait a few minutes and refresh this page.