I heard of a lady who once went to a cyber-cafe with a flash disk and asked the attendant to copy the internet for her so that she could read it at home. There are times I have wondered how big the world wide web is. How many websites are there on the internet? How long would it take me if I decided to diligently read everything there is on the internet so that I can get it over with and start doing something else. If you google this question, you’ll find that I am not the only one who has asked myself this question. Just do it. I won’t do it for you then start copying and pasting things here to dazzle you to make myself feel intelligent, but I get the feeling that if you started reading all the stuff there is on the internet today, let’s just say that by April 26th, 2094, around lunchtime, it is unlikely that you will have finished.

A couple of years ago I got myself a Blackberry. There was a time Safaricom had some sort of offer for the Blackberry 7130g. Now, if you still have a phone like this today, you need prayers, but at the time, whoa! you were the man! Like I have said before, I love gadgets like phones, computers and all manner of personal technology. In fact I remember once at a phone shop telling the salesperson I don’t like simple phones that you will sell me and then have a brochure or booklet or even a CD with the manual in the box, I want something that is so complicated that all you get is a url to go and download a one week tutorial to get you started. Anyway, I got this Blackberry smartphone (not too smart by today’s standards) and took it home. Later that week I discovered an amazing software called Viigo and the whole concept of RSS feeds. Basically with this software you could get news and info from blogs of your choice live on the go. Meaning that if any of the sites you selected got any new content, you would get it instantly. This software was free. Now let’s just talk about free for a moment. I am a developer and I write ‘expensive’ software. Free? You will be amazed at how much free software you can get on the internet. For me this was mind-boggling already. I have a friend with whom we share a passion for apps on the Apple AppStore. We refer to ‘free’ as ‘our price’. Anyway I digress. Through Viigo on the blackberry I subscribed to very interesting feeds about technology, bikes, cars, personal development, church, jokes and lots and lots of other stuff like newspapers. The Standard and Nation and most of our local media operators have RSS feeds on their sites.

I set my phone to download a maximum of 1000 articles for me to be reading when I got time. This would usually be in the evening before going to bed. So every evening I would get into bed and find that my phone had 1000 new articles for me to read. In the beginning it was fun and exciting. There was always something new to read. Some of the blogs I read had links and stories about other blogs that I would then proceed to subscribe to and add them to my RSS feeds. The next day by around 10 am the feeds would fill up again and I would have more articles to read. It began to get a bit overwhelming and I started skipping a few. At that time I also had several books that I was reading (actual, dead-tree version, paper books) but now I found I had no time for them. I noticed a very big change in my eating and sleeping habits. This phone became a job. When I would go to meetings and they asked me to wait, no problem. Long queues became a pleasure. I would read read read article by article.

Then the coincidences began. Every so often, I would experience, see or hear something that I had just read about. I became like google for some people. I began to feel so smart. It was not surprising to start conversations with “Hmmm… interesting that you would ask that, just this morning I was reading about…” I started asking myself “Man, where have you been, didn’t you know that all this stuff existed? Now read more and more, you have a lot of catching up to do”. I read voraciously. Nothing seemed to pass me. I had less and less time for anything else. Whenever the choice was offered about how I would like to spend my time on weekends, my blackberry won all the time. It did not take long before my wife uttered the four words every married man dreads. “We need to talk!” Now ladies, and you can google this, no man like to hear these words. As soon as you say this, aiii! It is like being summoned to the Hague. A man thinks about which are the best lawyers to engage, who are these people who have evidence against me? How can I get through this with minimal damage and many other similar thoughts. Before we even began this dreaded talk, I knew what it would be about. As she began talking in my mind I was thinking “Yes Sweetie, I know, I am hooked to this phone, I need help…” It was like an intervention, you know those meetings people have with relatives who are victims of substance abuse. Then I began to see if I could find articles about RSS feed addiction. Yes it was that bad. 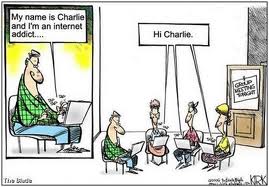 But we did not even need to go there. I was already getting stressed. Articles were flowing into my phone faster than I could read them. I would feel inadequate for not having read them in good enough time. Articles older than five days old would be replaced by new ones. There was just not enough time in the day to go through all of them. Most of them had really good personal development tips and so every article I failed to read meant I had missed an important opportunity to improve myself. So I would end up feeling foolish and ‘undeveloped’. What a terrible, ‘personally undeveloped’ person I was becoming. In part of my wife’s ‘lecture’ I remember her saying “What is the use of all this good stuff you are reading if it is not benefiting you in any way and you don’t seem to be putting any of it into practice?” She was right. I needed to start practicing some of the things I was learning. I would try and fail and it would lead to even more stress. 1000 articles a day would mean only 365,000 in a year and every three years I would only cover about a million articles. There are about 200 million sites on the internet (add 600 million if you count each Facebook account as a website) and if we were to say that each has conservatively say, ten good articles that comes to about 2,000 million articles so at the rate of 1000 a day, I would need to live about 5 million years maybe more if you factor things like eating and showers. This is assuming there are no new articles being written, which is impossible since even this blog post is an article. Woooooi! It is like being given a herd of elephants to eat, three times a day.

Have you ever gotten yourself into something and realized it was more than you bargained for? No let me change that. What have you gotten yourself into that is now beginning to overwhelm and crowd out other important areas of your life? We all need balance. We do not have the luxury of dealing with each aspect of our lives on its own. One at a time. In personal development you need to multi-task. We have to juggle all areas of our lives at the same time. Work, family/marriage, finances, physical health, spiritual health, mental health etc. are all important. We cannot afford to drop the ball on any of them. If you succeed in one of them and fail in all the rest you cannot be considered a success.

8 responses to “Exactly how big is the internet?”